Today is my first born son’s 30th birthday, otherwise known as my guinea pig child. I was 18 when I had Travis. I often joke with him that we grew up together, but we really did. While I was still trying to find my way, Travis found his. Early.

He’s always seemed to know exactly who he is. Because he’s exceptionally intelligent, we sometimes call him TRAVIPEDIA. He knows something about practically everything. And he’s one of the most comfortable-in-his-own-skin people I know.

But being a young mom, I always worried about my guinea pig child.

I remember one day, just before Travis was about to graduate from high school, I was in the elevator in the medical office building where I worked. A very pregnant teenage girl stepped in with me. She was at least 8 months along and stood in the corner with her head down, shoulders hunched, hair covering her face, and something in me said, “Say something to her.” I told her a little about my story and how Travis was about to graduate from high school and was heading for college in New York, and although not easy, he turned out better than okay. I told her that she could do this, and that her baby would turn out better than okay too. She had a hopeful but cautious smile, and I understood that. I gave her a hug and she was gone.

I think that was the day I finally believed it – that Travis had actually turned out better than okay. I’d been holding my breath for 18 years, always worried about how the no-college, divorced, teenage mom’s kid would turn out.

Well, here’s how he turned out.

In 2011 when I was at the beginning of my second divorce from Travis’s stepdad, the only dad he’d known since the age of 6, he called me and said, “Mom I’ve given notice at work. I’m coming home to help you.” I urged him not to come, not to uproot his life in New York where he was so happy. I told him we’d be okay. But he said, “Mom it’s already done.”

Travis became “The” Big Brother. He went to all of Adrian’s high school and college football games, photographed and videoed each of Grace’s performances, picked up, dropped off, and allowed me to just speak my worries about being a solo-parent of two teenagers during a difficult divorce. Travis is generous, kind, humble, selfless and so very talented. 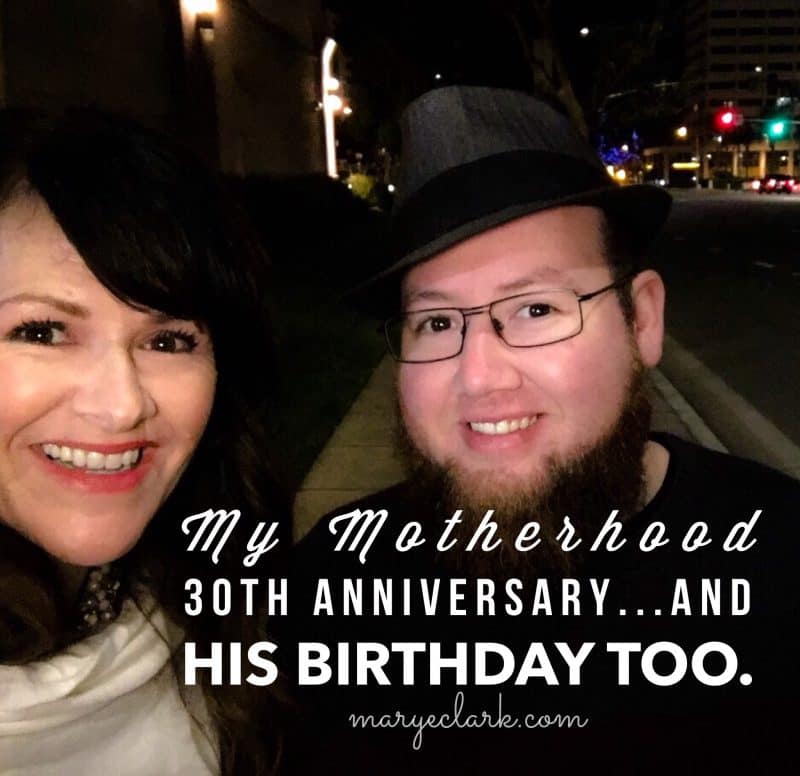 My favorite things Travis says to me are, “You do you, Mom,” and “You got this.” It’s his way of telling me that my ideas, the actions I take, the plans I have…even though I’m trying to get his input on them, are perfect as they are. It’s him telling me he has confidence in my choices, that he believes in me. I guess it’s really like Travis is telling me, “Mom, you’re gonna be better than okay.”

So today, on the 30th anniversary of my motherhood, I wish you happy 30th birthday my sweet baby boy, my friend and mentor, Travis.

And I’m booking a senior cruise for us the day you turn 55!

Love, light and grace to you.